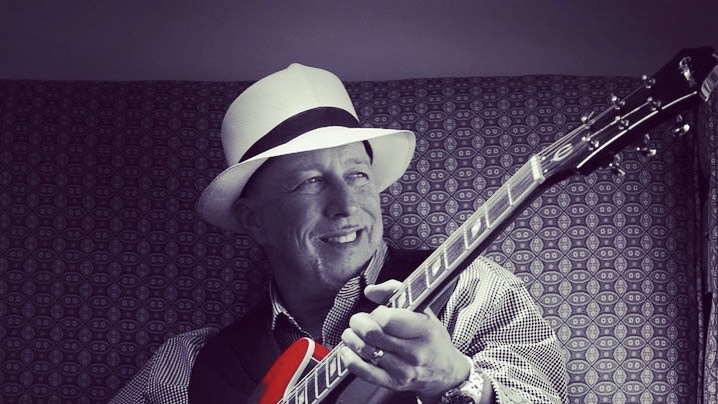 Stacy Mitchhart’s musical journey began in his native Cincinnati, Ohio, in a home where jazz guitar masters like Wes Montgomery and Johnny Smith were played on the stereo. Therefore it was natural that he gravitated to the six-string. As a child he saw the outrageous Little Richard on a TV show and was captivated by his showmanship. Little Richard looked and acted differently than anybody he had ever been exposed to. Today, Mitchhart has created his own brand of showmanship that brings audiences back again and again.

“I heard Springsteen, Zeppelin and Pink Floyd, but that stuff never moved me,” he recounts. “When I saw Bobby ‘Blue’ Bland and B.B. King, I knew what I wanted to do. Since then, my playing’s just gotten more focused and aggressive with time.”
Another serious inspiration was Cincinnati guitarist and singer Frank Hedges, a musical preacher whose sons were also in Mitchhart’s first band. “He played guitar in a strange, almost drum like style, which taught me to concentrate on the groove.”
Mitchhart has always been a bandleader. He developed his sound and stagecraft at the helm of four groups in Cincinnati — climbing the pinnacle of the city’s blues scene. He also began his recording career there, with 1993’s Blues Transfusion. Since then he’s made more than a dozen more albums, with many charting in the top 10 on Billboard Blues Charts. By the early ’90s he was the top blues act in Cincinnati, But when he played his first gigs in Nashville 26 years ago, he knew he’d found his musical home.
“The very first time I came to Nashville I sold 24 CDs off the bandstand and the audience was amazing,” Mitchhart recalls. “They were alive!” In short order he was offered the house band slot at Printers Alley’s famed Bourbon Street Blues and Boogie Bar.

“Very quickly, because there are so many tourists in Nashville, I realized I was seeing different people in the audience from all over the world every single night, and because this is Music City, they were really coming to listen,” he continues. “The Stacy Mitchhart Band has become known as one of the top live acts in Nashville because our sound is different and we bring a lot of energy to the stage.”
Over two decades later, that hasn’t changed. Mitchhart’s name is still synonymous with “blues” in the most rapidly growing city along the Cumberland River and he’s still playing 200 of his annual dates without leaving home. Thanks to the international following he’s largely built in Nashville at Bourbon Street Blues and Boogie Bar and BB Kings, Mitchhart has also performed in eight other countries.
“I’ve played everything from 50,000 seat, sold-out arenas to 5,000-to-15,000 attendance blues festivals to 1,500-seat theaters to 250-seat clubs to a 40-seat grocery store to backyard barbecues and weddings to corporate parties,” he relates. “The bottom line is that every gig is important to the people that booked you and the audience always deserves your best.
“The truth is,” Mitchhart continues, “I’m more comfortable onstage entertaining than I am in my own living room. I’ve spent my whole life there.

During the Pandemic, through live virtual performances, Stacy’s fans have discovered his Solo Acoustic Blues Concerts. More than half of his European shows are this style and now Stacy is also performing 50+ solo concerts in the US.