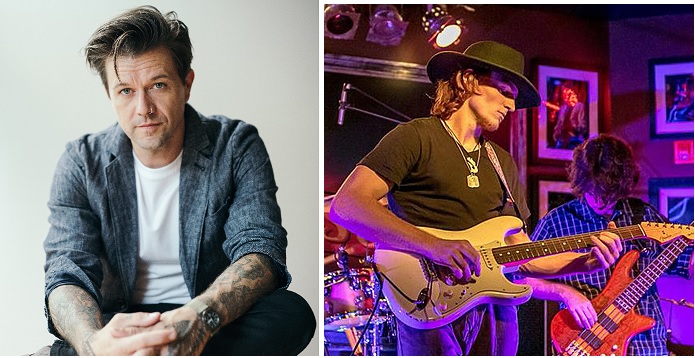 A Wisconsin native, Eric Tessmer developed his love affair with music through a kind of familial osmosis. Both his grandmother and father played guitar, and Hendrix, Led Zeppelin, and Cream were all staples around the house growing up. Inspired in part by watching reruns of Austin City Limits on his local PBS station, Tessmer moved to Texas straight out of high school, and he quickly garnered a formidable reputation there for his fierce fretwork and explosive live performances. He cut his teeth playing residencies in clubs and bars, shared stages with everyone from Gary Clark, Jr. to Tab Benoit, and released a series of live and studio albums that earned widespread critical acclaim, with the Austin Chronicle dubbing him an “SRV-fast firebrand” and the Austin American Statesman hailing him as a “working class guitar hero.”
– – – – – – – – – – – – – – – – – – – – – – – – – – – – – – – – – – – – – – – – – –
Shaw Davis is quickly becoming an artist to watch in Contemporary Blues-Rock.  He’s a fast and flashy player whose approach rests equally on technical assurance and musical intelligence.

Born April 4, 1995, the young guitarist has burst his way onto the Blues-Rock scene and is already known for his raw and emotional style.  Backed by long-time friend, drummer Bobby Van Stone and bassist Patrick Stevenson, Shaw Davis & The Black Ties feature their own brand of Psychedelic Blues-Rock that continues to win over fans and crowds of all ages.

Formed May of 2016 out of Pompano Beach, Florida, the young power trio made multiple appearances on Blues Radio International and has been featured in South Florida Music Magazine for their crowd pleasing performances.