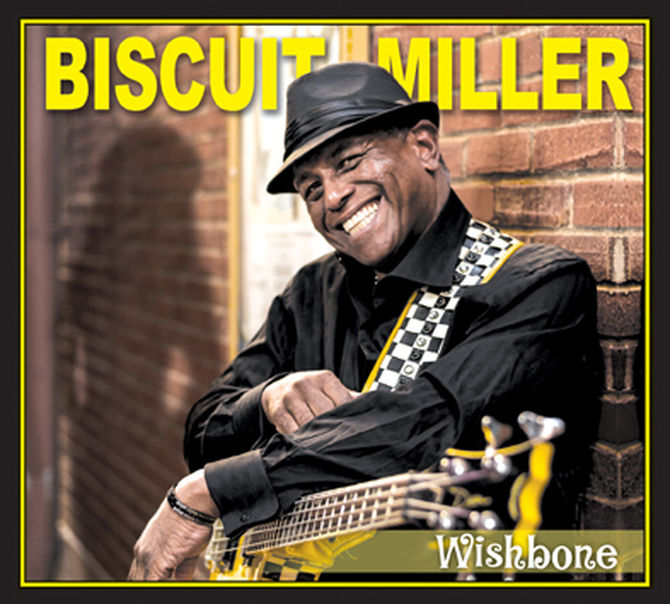 Biscuit and his band, The Mix, have been touring extensively ever since he won his first BMA in 2012 followed by a second BMA for Best Bass Player in 2017.  Biscuit is known for his high energy shows and blazing million-dollar smile. He is a born entertainer and is at home on the stage where he connects with his audience through a fun and funky approach to the blues. But don’t let the fun and food songs fool you! This is a dedicated group of musicians with an amazing depth of talent.

Biscuit was introduced to the bass for the first time at the age of eleven when visiting his friend Datrick. It was sitting in a corner collecting dust when the young Biscuit picked it up and started playing it. The four string electric bass belonged to Datrick’s older brother Darnell, who taught him a couple of songs. Biscuit took to it immediately and thus began a love affair with playing bass that has taken him places he could never have imagined. He formed his first band, Clever, with childhood friend Ivan Wallace. They moved to Minneapolis in 1982. Soon after, a mutual friend, Joe Rowe introduced Biscuit to Sonny Rogers who taught him a lot about playing basic blues. During his time with Rogers, they recorded “They Call Me the Cat Daddy”, which won Rogers a Handy Award for Best New Artist. Sadly, Sonny passed away before he was able to accept the award.

Biscuit then went on to play with other respected blues artists such as, Mojo Buford, formerly with Muddy Waters, and Lady Blue, backup vocalist for Ike and Tina Turner. One day, Biscuit received a phone call requesting him to come back home to sub for Chicago’s own legendary Lonnie Brooks who needed a bass player for one night. That one night lasted for over ten years as Biscuit then came the permanent bass player for the Lonnie Brooks Band.

In 2000 he formed Biscuit and The Mix to fill up some down-time. During this time, he also completed his first studio recording “Come Together”. Biscuit frequently could be found sitting in with the up and coming blues guitarist Anthony Gomes. During one of these sessions, he was asked to join the band full time and he spent the next five years touring with Anthony. During his time with Anthony Gomes, they released five CD’s; Unity, Sweet Stringin’ Soul, Long Way Home, Music is the Medicine, and Live at the Triple Door.

Biscuit Miller has graced the covers of several publications, including the Blues Festival Guide and Big City Rhythm & Blues. In 2012 he was awarded his first Blues Music Award following the release of his second studio recording, “Blues With A Smile”. Having received wide air play on Sirius XM Radio, “Blues With A Smile” is aptly named, as Biscuit is known around the world for his huge, heartfelt smile as well as his antics as a funky bassist turned front man.
http://biscuitmiller.com